“Saudi Arabia has officially recognised a humanoid robot as a citizen, marking the first time in history that an AI device has been awarded such status.

Specific details of Sophia’s citizenship were not discussed. It is unclear whether she will receive the same rights as human citizens, or if Saudi Arabia will develop a specific system devoted to robots.

The system could work in a similar way to the “personhood” status proposed by European Parliament earlier this year, which would see robots with AI given rights and responsibilities.”

“WikiLeaks has unleashed a treasure trove of data to the internet, exposing information about the CIA’s arsenal of hacking tools. Code-named Vault 7, the first data is due to be released in serialized form, starting off with “Year Zero” as part one. A cache of over 8,500 documents and files has been made available via BitTorrent in an encrypted archive. Password to the files is:

The documents reveal that the CIA worked with MI5 in the UK to infect Samsung smart TVs so their microphones could be turned on at will. Investigations were carried out into gaining control of modern cars and trucks, and there is even a specialized division of the CIA focused on accessing, controlling and exploiting iPhones and iPads. This and Android zero days enables the CIA to “to bypass the encryption of WhatsApp, Signal, Telegram, Wiebo, Confide and Cloackman by hacking the “smart” phones that they run on and collecting audio and message traffic before encryption is applied.”

The shakeup and insanity of “Pokémon Go” in the real world

Since its release Wednesday night, a new game, Pokémon Go has already gone on to become the top-grossing game in the three countries where it’s currently available, adding nearly $11 billion to the value of Nintendo in less than a week. 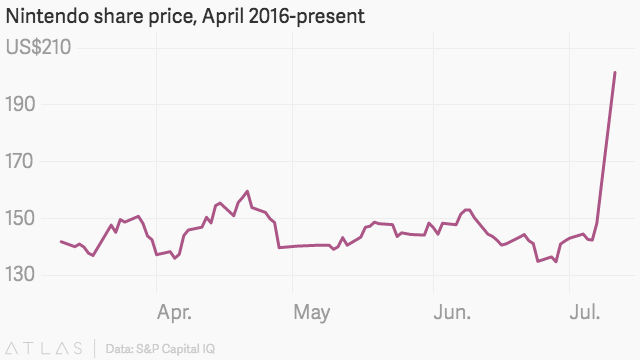 In the United States, by July 8–just two days after its release–the game was installed on more than “5 percent of Android devices in the country, is now on more Android phones than dating app Tinder, has daily active users neck and neck with that of social network Twitter, and is also being played an average of 43 minutes a day–more time spent than on WhatsApp or Instagram.”

“Some fans are now tweeting about playing the game while driving, and one user already reports, “Pokemon Go put me in the ER last night… Not even 30 minutes after the release…I slipped and fell down a ditch.” In Australia the game has been leading some players into their local police station, and a woman in Wyoming reports that the game actually led her to a dead body floating in a river. One Pokemon Go screenshot has also gone viral. It shows a man capturing a Pokemon while his wife gives birth…” 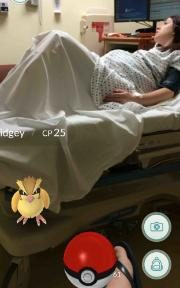 The app’s popularity has created lagging servers and forced the company Niantic to delay its international roll-out, meaning “Those who have already downloaded the game in the U.S., Australia and New Zealand can still play it, while those in the U.K., the Netherlands and other countries will have to wait.”

Meanwhile, as people clearly can’t wait, there has been a flood of downloads of unofficial copies of the game, exposing users to hackers who are circulating malicious versions of the game in order to backdoor their devices. “A remote access tool (RAT), known as DroidJack (or SandroRAT), has been added to some APK files, allowing third parties to gain full control over the users’ mobile devices. Permissions granted then include: being able to directly call phone numbers, reading phone status’ and identities, editing and reading text messages, sending SMS messages and recording audio.”

It surely is spurious times…

UPDATE 13/7 — Holocaust Museum to visitors: Please stop catching Pokemon here. “Playing the game is not appropriate in the museum, which is a memorial to the victims of Nazism,” Andrew Hollinger, the museum’s communications director, said. “We are trying to find out if we can get the museum excluded from the game.”

UPDATE 14/7 — “Law enforcement agencies around the globe are reminding citizens to obey trespassing laws and follow common sense when playing Pokemon Go. The new crazy-popular mobile game has led to some frightening results in recent days, such as the location of a dead body and robberies of players in Missouri. Now, San Francisco Police Department Captain Raj Vaswani warned in one online posting for players to “obey traffic laws, please. Do not run into trees, meters, and things that are attached to the sidewalk; they hurt,” he said. “Do not drive or ride your bike / skateboard / hipster techie device while interacting with the app. Know where your kids are going when playing with the app, set limits on where they can go, so they don’t keep going trying to get that Pokemon.”

UPDATE 19/7 — “Pokemon Go is now the biggest mobile game of all time in the United States. Not only has it surpassed Twitter’s daily users, but it is seeing people spend more time in its app than in Facebook. The game also surpassed Tinder in terms of popularity (based on installations) on July 7th.”

UPDATE 29/7 — “It turns out that the stairs of the Internet Archive’s San Francisco headquarters are a PokéGym, a site where players can train their Pokémon and fight with other Pokémon. Fortunately, the Pokémon warriors aren’t rowdy or disruptive; they resemble somnambulistic zombies stumbling around under the control of their glowing smartphone screens.”

UPDATE 8/8 — How Pokemon Go will make money from you. “Augmented reality games like Ingress and Pokemon Go have the potential to open up a very lucrative new revenue stream based on the acquisition and sale of data – not just personal data, but aggregated spatial data about urban activity patterns. There has already been some controversy about the terms of service for players, which give Niantic access to all manner of data on their phones – including email contacts and social media profiles. This data could potentially be sold to third parties with an interest in targeted advertising. But it is not only individually identifiable personal data that interests Niantic. They are also interested in the spatial data that is generated by Pokemon Go players. As has been widely observed, playing the game rapidly drains phone batteries, because when the game is open your phone is constantly in touch with Niantic servers and providing location information about your movements. […] Niantic is now harvesting “geospatial data” about millions of people’s movements: about how far they are prepared to travel as part of game play; about the kinds of places they stop during game play; about the groups they travel with; and the connections they make during game play, and much more.”

UPDATE 18/8 — I recently discovered some interesting background to the company Niantic Inc.—the company that developed Pokémon Go and indeed Ingress. The company was formed in 2010 by the founder of Keyhole Inc., John Hanke as “Niantic Labs,” being an internal startup within Google. Niantic left Google in October 2015.

Keyhole Inc., founded in 2001, was a “software development company specialising in geospatial data visualisation applications and was acquired by Google in 2004.” Keyhole was backed by Sony venture capital, NVIDIA and the CIA’s venture capital arm In-Q-Tel, with the majority of In-Q-Tel’ funds coming from the National Geospatial-Intelligence Agency. “Keyhole’s marquee application suite, Earth Viewer, emerged as the highly successful Google Earth application in 2005; other aspects of core technology survive in Google Maps, Google Mobile and the Keyhole Markup Language. The name “Keyhole” is a homage to the KH reconnaissance satellites, the original eye-in-the-sky military reconnaissance system now some 50 years old.”

The Next Wave of Google Robots

Boston Dynamics, well known as a developer of robots for the United States military as part of the “Defense Advanced Research Projects Agency,” has publicised its “next generation” of androids and robots.

Boston Dynamics was sold to Google in 2013.