Note the stats from Pew Research Center for Journalism and Media, that 64% of users surveyed rely on just one source alone of social media for news content—i.e. Facebook, Twitter, YouTube, etc, while 26% would check only two sources, and 10% three or more: A staggeringly concerning trend, given the rampant personalisation of these screen environments and what we know about the functioning and reinforcement of The Filter Bubble. This is a centralisation of power and lack of diversity and compare/contrast that the “old media” perhaps could only dream of…

“It’s easy to believe you’re getting diverse perspectives when you see stories on Facebook. You’re connected not just to many of your friends, but also to friends of friends, interesting celebrities and publications you “like.”

But Facebook shows you what it thinks you’ll be interested in. The social network pays attention to what you interact with, what your friends share and comment on, and overall reactions to a piece of content, lumping all of these factors into an algorithm that serves you items you’re likely to engage with. It’s a simple matter of business: Facebook wants you coming back, so it wants to show you things you’ll enjoy.”

The Reuters Institute for the Study of Journalism research also suggests 51% of people with online access use social media as a news source. Facebook and other social media outlets have moved beyond being “places of news discovery” to become the place people consume their news, it suggests.

The study found Facebook was the most common source—used by 44% of all those surveyed—to watch, share and comment on news. Next came YouTube on 19%, with Twitter on 10%. Apple News accounted for 4% in the US and 3% in the UK, while messaging app Snapchat was used by just 1% or less in most countries.

According to the survey, consumers are happy to have their news selected by algorithms, with 36% saying they would like news chosen based on what they had read before and 22% happy for their news agenda to be based on what their friends had read. But 30% still wanted the human oversight of editors and other journalists in picking the news agenda and many had fears about algorithms creating news “bubbles” where people only see news from like-minded viewpoints.

Most of those surveyed said they used a smartphone to access news, with the highest levels in Sweden (69%), Korea (66%) and Switzerland (61%), and they were more likely to use social media rather than going directly to a news website or app.

The report also suggests users are noticing the original news brand behind social media content less than half of the time, something that is likely to worry traditional media outlets.”

And to exemplify the issue, these words from Slashdot: “Over the past few months, we have seen how Facebook’s Trending Topics feature is often biased, and moreover, how sometimes fake news slips through its filter.”

“The Washington Post monitored the website for over three weeks and found that Facebook is still struggling to get its algorithm right. In the six weeks since Facebook revamped its Trending system, the site has repeatedly promoted “news” stories that are actually works of fiction. As part of a larger audit of Facebook’s Trending topics, the Intersect logged every news story that trended across four accounts during the workdays from Aug. 31 to Sept. 22. During that time, we uncovered five trending stories that were indisputably fake and three that were profoundly inaccurate. On top of that, we found that news releases, blog posts from sites such as Medium and links to online stores such as iTunes regularly trended.”

UPDATE 9/11/16 — US President Barack Obama criticises Facebook for spreading fake stories: “The way campaigns have unfolded, we just start accepting crazy stuff as normal,” Obama said. “As long as it’s on Facebook, and people can see it, as long as its on social media, people start believing it, and it creates this dust cloud of nonsense.” 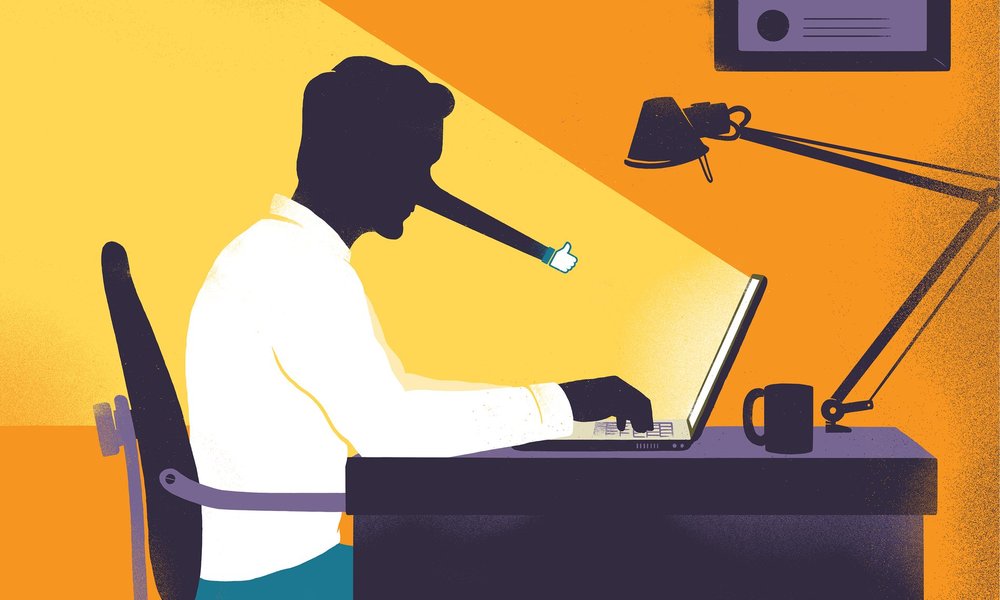 How technology disrupted the truth

Coinciding with a continued rise in public cynicism and a legitimate mistrust of mainstream media beholden to systems of power that are discredited, it seems most people turn to social media networks to get their news now. But this seemingly doesn’t fix the problem. Rather than a “democratisation” of the media and/or a mass reclamation of investigative journalism (as technology pundits continuously purport), there’s arguably been the opposite.

Now, with the convergence of closed social media networks that are beholden to nefarious algorithms such as The Filter Bubble and the personalisation of information, as an article in the Guardian explains, “Social media has swallowed the news – threatening the funding of public-interest reporting and ushering in an era when everyone has their own facts. But the consequences go far beyond journalism.”

“Twenty-five years after the first website went online, it is clear that we are living through a period of dizzying transition. For 500 years after Gutenberg, the dominant form of information was the printed page: knowledge was primarily delivered in a fixed format, one that encouraged readers to believe in stable and settled truths.

Now, we are caught in a series of confusing battles between opposing forces: between truth and falsehood, fact and rumour, kindness and cruelty; between the few and the many, the connected and the alienated; between the open platform of the web as its architects envisioned it and the gated enclosures of Facebook and other social networks; between an informed public and a misguided mob.

What is common to these struggles – and what makes their resolution an urgent matter – is that they all involve the diminishing status of truth. This does not mean that there are no truths. It simply means, as this year has made very clear, that we cannot agree on what those truths are, and when there is no consensus about the truth and no way to achieve it, chaos soon follows.

Increasingly, what counts as a fact is merely a view that someone feels to be true – and technology has made it very easy for these “facts” to circulate with a speed and reach that was unimaginable in the Gutenberg era (or even a decade ago).

Too much of the press often exhibited a bias towards the status quo and a deference to authority, and it was prohibitively difficult for ordinary people to challenge the power of the press. Now, people distrust much of what is presented as fact – particularly if the facts in question are uncomfortable, or out of sync with their own views – and while some of that distrust is misplaced, some of it is not.

In the digital age, it is easier than ever to publish false information, which is quickly shared and taken to be true – as we often see in emergency situations, when news is breaking in real time.”

It’s like the well-oiled tactics of the tobacco industry that have since permeated pretty much all industries—confuse the hell out of people so they don’t know what’s true anymore. It’s a popular PR tactic honed over decades for social control and manipulation of democracy, and it’s that element that exists and is especially reinforced online (particularly in real time), in the giant echo chamber of corporate social media networks, where the user is constantly subjected to streams and streams of information about current events—most devoid of context, analysis, or even significant depth in the time and space of a tweet.

The grounding that gives rise to physical reality and epistemological truths goes missing when we’re tied to screens that simply reflect our projections.

In the words of Sherry Turkle, the issues facing our planet right now cannot be solved in the time-space of texting/tweeting. So if the way we understand, perceive and relate to the world through the prism of media (mainstream media and social media alike) is in decline, it should tell us volumes about the state of democracy…

Global Voices’ adds: “The need for fact-checking hasn’t gone away. As new technologies have spawned new forms of media which lend themselves to the spread of various kinds of disinformation, this need has in fact grown. Much of the information that’s spread online, even by news outlets, is not checked, as outlets simply copy-paste — or in some instances, plagiarise — “click-worthy” content generated by others. Politicians, especially populists prone to manipulative tactics, have embraced this new media environment by making alliances with tabloid tycoons or by becoming media owners themselves.