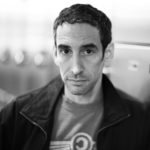 Douglas Rushkoff is a technology media theorist, writer, lecturer, and documentary film-maker whose work focuses on human autonomy in a digital age. He is the author of fifteen bestselling books on media, technology, and society, including Program or Be Programmed, Present Shock, and Throwing Rocks at the Google Bus. He is the creator of the award-winning PBS Frontline documentaries Generation Like, Merchants of Cool, The Persuaders and Digital Nation.

Rushkoff is currently Professor of Media Theory and Digital Economics at the University of New York, Queens College. He has previously lectured at The New School University in Manhattan.

He is the recipient of the Marshall McLuhan Award for his book Coercion and the Jacques Ellul Award for his documentary The Merchants of Cool.