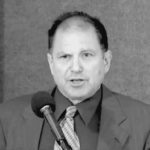 Jeff Chester is Executive Director of the Center for Digital Democracy, a non-profit organisation advocating for consumers on digital privacy and consumer protection issues.

He co-directed the campaign that led to the Congressional creation of the Independent Television Service (ITVS) for public TV in the 1980s, and also co-founded the National Campaign for Freedom of Expression, an artist advocacy group that supported federal funding for artists.