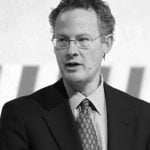 Nicholas Carr writes about technology and culture. His new book, Utopia Is Creepy, collects his best essays, blog posts, and other writings from the past dozen years, providing an alternative history of our tech-besotted time.

Carr’s 2014 work The Glass Cage: How Our Computers Are Changing Us, examined the personal and social consequences of our ever growing dependency on computers, robots, and apps. His previous work, The Shallows: What the Internet Is Doing to Our Brains, was a 2011 Pulitzer Prize finalist and a New York Times bestseller.

Carr has also written for The Atlantic, the Wall Street Journal, the New York Times, Wired, Nature, MIT Technology Review, and many other periodicals. His essays, including “Is Google Making Us Stupid?” and “The Great Forgetting,” have been collected in several anthologies, including The Best American Science and Nature Writing, The Best Spiritual Writing, and The Best Technology Writing. In 2015, he received the Neil Postman Award for Career Achievement in Public Intellectual Activity from the Media Ecology Association.