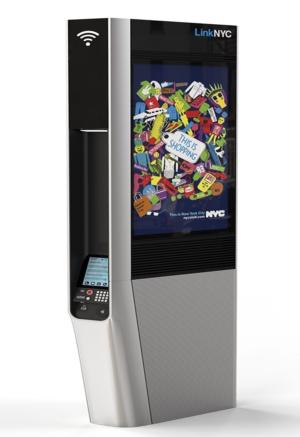 “An ambitious project to blanket New York and London with ultrafast Wi-Fi via so-called “smart kiosks,” which will replace obsolete public telephones, are the work of a Google-backed startup.

Each kiosk is around nine feet high and relatively flat. Each flat side houses a big-screen display that pays for the whole operation with advertising.

Each kiosk provides free, high-speed Wi-Fi for anyone in range. By selecting the Wi-Fi network at one kiosk, and authenticating with an email address, each user will be automatically connected to every other LinkNYC kiosk they get within range of. Eventually, anyone will be able to walk around most of the city without losing the connection to these hotspots.

Wide-angle cameras on each side of the kiosks point up and down the street and sidewalk, approximating a 360-degree view. If a city wants to use those cameras and sensors for surveillance, it can.

Over the next 15 years, the city will go through the other two phases, where sensor data will be processed by artificial intelligence to gain unprecedented insights about traffic, environment and human behavior and eventually use it to intelligently re-direct traffic and shape other city functions.”