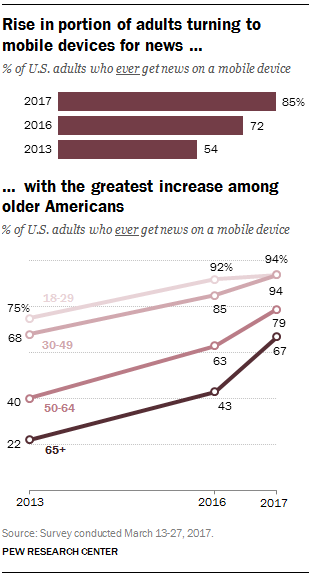 Mobile devices have rapidly become one of the most common ways for Americans to get news, and the sharpest growth in the past year has been among Americans ages 50 and older, according to a Pew Research Center survey conducted in March.

More than eight-in-ten U.S. adults now get news on a mobile device (85%), compared with 72% just a year ago and slightly more than half in 2013 (54%). And the recent surge has come from older people: Roughly two-thirds of Americans ages 65 and older now get news on a mobile device (67%), a 24-percentage-point increase over the past year and about three times the share of four years ago, when less than a quarter of those 65 and older got news on mobile (22%).

The strong growth carries through to those in the next-highest age bracket. Among 50- to 64-year-olds, 79% now get news on mobile, nearly double the share in 2013. The growth rate was much less steep – or nonexistent – for those younger than 50.”