Wiring Up The Big Brother Machine…And Fighting It 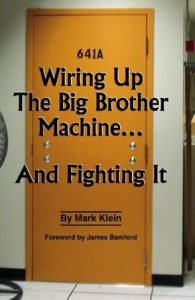 Whistleblower Mark Klein tells the story of the illegal government spying apparatus installed at an AT&T office by the National Security Agency, and his battle to bring it to light and protect Americans’ 4th Amendment rights. After the New York Times revealed in 2005 that the NSA was spying on Americans’ phone calls and e-mail without Constitutionally-required court warrants, the Bush administration openly defended this practice which also violated the Foreign Intelligence Surveillance Act. All details of the highly secret program remained hidden from the public—until Klein came forward. A technician for over 22 years at telecom giant AT&T, Klein was working in the Internet room in San Francisco in 2003 and discovered the NSA was vacuuming everyone’s communications into a secret room, and he had the documents to prove it (sample pages included). He went to the media in 2006, and then became a witness in a lawsuit brought against the company by the Electronic Frontier Foundation.