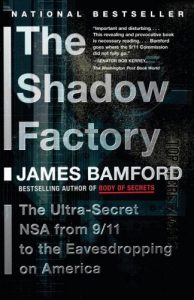 James Bamford has been the preeminent expert on the National Security Agency since his reporting revealed the agency’s existence in the 1980s. Now Bamford describes the transformation of the NSA since 9/11, as the agency increasingly turns its high-tech ears on the American public.

The Shadow Factory reconstructs how the NSA missed a chance to thwart the 9/11 hijackers and details how this mistake has led to a heightening of domestic surveillance. In disturbing detail, Bamford describes exactly how every American’s data is being mined and what is being done with it. Any reader who thinks America’s liberties are being protected by Congress will be shocked and appalled at what is revealed here.