Myth of the Machine: Technics and Human Development 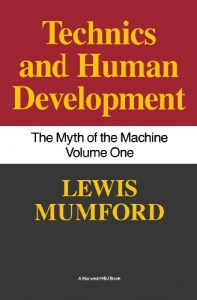 “In The Myth of the Machine, Mumford insisted upon the reality of the megamachine: the convergence of science, economy, technics and political power as a unified community of interpretation rendering useless and eccentric life-enhancing values. Subversion of this authoritarian kingdom begins with that area of human contact with the world that cannot be successfully repressed – one’s feelings about one’s self.”

In the Prologue, Mumford defines his purpose here as “to question both the assumptions and the predictions upon which our commitment to the present forms of scientific and technical progress, treated as ends in themselves, have been based.”

Mumford dates the emergence of the “Machine” from the pyramid age (primarily with reference to Egypt, but also acknowledging other ancient cultures in that era which produced massive and precisely engineered structures). He uses the term ‘Megamachine’ to describe the social and bureaucratic structure that enabled a ruler to coordinate a huge workforce to undertake vast and complex projects. Where the projects were public works such as irrigation systems and canals or the construction of cities, Mumford referred to the “labour machine”, and where they involved conquest he used the expression “military machine”. The term “Megamachine” connoted the social structure in its entirety.