Background Research > Books > Pentagon Of Power: The Myth Of The Machine

Pentagon Of Power: The Myth Of The Machine 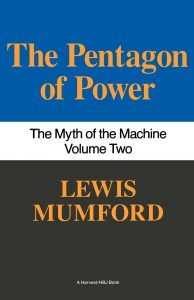 The Myth of the Machine is a two-volume book taking an in-depth look at the forces that have shaped modern technology since prehistoric times. The first volume, Technics and Human Development, was published in 1967, followed by the second volume, The Pentagon of Power, in 1970. The author, Lewis Mumford, shows the parallel developments between human tools and social organization mainly through language and rituals. It is considered a synthesis of many theories Mumford developed throughout his prolific writing career. Volume 2 was a Book-of-the-Month Club selection.

The “pentagon” refers to politics, power (in the sense of physical energy), productivity, profit, and publicity.

Although much of the volume explores the negative influence of centralised power and exploitative behaviour on the human condition, it finishes on a positive and optimistic note in the closing chapters. His final remark is:

“But for those of us who have thrown off the myth of the machine, the next move is ours: for the gates of the technocratic prison will open automatically, despite their rusty ancient hinges, as soon as we choose to walk out.”