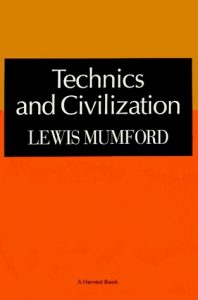 Technics and Civilization is a 1934 book by American philosopher and historian of technology Lewis Mumford. The book presents the history of technology and its role in shaping and being shaped by civilizations. According to Mumford, modern technology has its roots in the Middle Ages rather than in the Industrial Revolution. It is the moral, economic, and political choices we make, not the machines we use, Mumford argues, that have produced a capitalist industrialized machine-oriented economy, whose imperfect fruits serve the majority so imperfectly.

Apart from its significance as a monumental work of scholarship in several disciplines, Mumford explicitly positioned the book as a call-to-action for the human race to consider its options in the face of the threats to its survival posed by possible ecological catastrophe or industrialised warfare. Technics and Civilization is the first book in Mumford’s four-volume Renewal of Life series, followed by The Culture of Cities (1938), The Condition of Man (1944), and The Conduct of Life (1951).