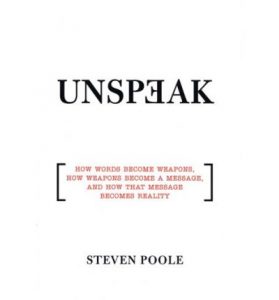 Unspeak is language as a weapon. Every day, we are bombarded with those apparently simple words or phrases that actually conceal darker meanings. ‘Climate change’ is less threatening than ‘global warming’; we say ‘ethnic cleansing’ when we mean mass murder. As we absorb and repeat Unspeak we are accepting the messages that politicians, businessmen and military agencies wish us to believe. Operation Iraqi Freedom did more than put a positive spin on the American war with Iraq; it gave the invasion such a likeable name that the American news networks quickly adopted it as their tagline for reporting on the war. By repackaging the language we use to describe international affairs or domestic politics, Unspeak tries to make controversial issues unspeakable and, therefore, unquestionable. In this thought-provoking and important book, Steven Poole traces the globalizing wave of modern Unspeak from culture wars to the culture of war and reveals how everyday words are changing the way we think.