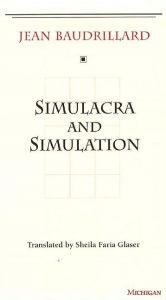 Simulacra and Simulation (French: Simulacres et Simulation) is a 1981 philosophical treatise by Jean Baudrillard, in which he seeks to examine the relationships among reality, symbols, and society, in particular the significations and symbolism of culture and media that are involved in constructing an understanding of shared existence.

Simulacra are copies that depict things that either had no original to begin with, or that no longer have an original. Simulation is the imitation of the operation of a real-world process or system over time.

Simulacra and Simulation is most known for its discussion of symbols, signs, and how they relate to contemporaneity (simultaneous existences). Baudrillard claims that our current society has replaced all reality and meaning with symbols and signs, and that human experience is a simulation of reality. Moreover, these simulacra are not merely mediations of reality, nor even deceptive mediations of reality; they are not based in a reality nor do they hide a reality, they simply hide that nothing like reality is relevant to our current understanding of our lives. The simulacra that Baudrillard refers to are the significations and symbolism of culture and media that construct perceived reality, the acquired understanding by which our lives and shared existence is and are rendered legible; Baudrillard believed that society has become so saturated with these simulacra and our lives so saturated with the constructs of society that all meaning was being rendered meaningless by being infinitely mutable. Baudrillard called this phenomenon the “precession of simulacra”.