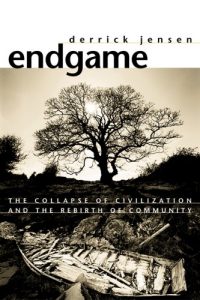 Endgame is a two-volume work by Derrick Jensen, published in 2006, which argues that civilization is inherently unsustainable and addresses the resulting question of what to do about it. Volume 1, The Problem of Civilization, spells out the need to immediately and systematically destroy civilization. Volume 2, Resistance, is about the challenging physical task that dismantling civilization presents.

The long-awaited companion piece to Derrick Jensen’s immensely popular and highly acclaimed works A Language Older Than Words and The Culture of Make Believe. Accepting the increasingly widespread belief that industrialized culture inevitably erodes the natural world, Endgame sets out to explore how this relationship impels us towards a revolutionary and as-yet undiscovered shift in strategy. Building on a series of simple but increasingly provocative premises, Jensen leaves us hoping for what may be inevitable: a return to agrarian communal life via the disintegration of civilization itself. 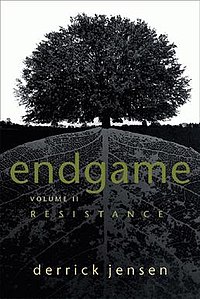 Whereas Volume 1 of Endgame presents the problem of civilization, Volume 2 of this pivotal work illustrates our means of resistance. Incensed and hopeful, impassioned and lucid, Endgame leapfrogs the environmental movement’s deadlock over our willingness to change our conduct, focusing instead on our ability to adapt to the impending ecological revolution.