The Engineering of Consent 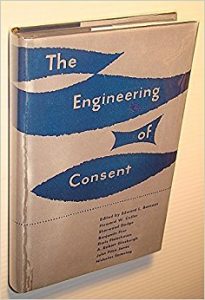 In his own words, Bernays describes engineering consent as “use of an engineering approach—that is, action based only on thorough knowledge of the situation and on the application of scientific principles and tried practices to the task of getting people to support ideas and programs.”

Bernays explained, “Professionally, [public relations] activities are planned and executed by trained practitioners in accordance with scientific principles, based on the findings of social scientists. Their dispassionate approach and methods may be likened to those of the engineering professions which stem from the physical sciences.”

The essay appeared in the Annals of the American Academy of Political and Social Science. The author’s observations in the essay include the following: